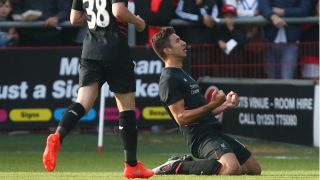 Liverpool boss Jurgen Klopp says scoring a debut goal was a dream and a big moment in the development of Marko Grujic.

The Reds thrashed Fleetwood Town 5-0 at Highbury on Wednesday, with the 20-year-old midfielder hitting the post and winning a penalty that was missed for Danny Ings before putting his side in front during a frantic start to the match.

Liverpool added to the scoreline with second-half strikes from Ben Woodburn, Lucas Leiva and a double from Roberto Firmino.

But Grujic was the man who got the ball rolling and Klopp acknowledged it was a moment to be proud of as the Serbia international looks to settle in following his move from Red Star Belgrade.

"He scored a goal in his first game in the first situation – it is a dream," Klopp told the club's official website.

"You saw it, in a friendly game not often a player celebrates like him but obviously it was a big moment. It was nice to see.

"He is still a young lad – he is 20 years old and that means there is a lot to develop physically and, of course, in the football parts. But it was absolutely OK [his debut]."

What a moment getting my first goal and also a great win July 13, 2016

Woodburn was another youngster to impress as Liverpool made it two wins from as many games in pre-season ahead of their matches with Wigan Athletic and Huddersfield Town.

Klopp added: "Woodburn is a natural offensive player. It is nice to see, really nice to see.

"They are a little bit tired. Really good players, smart players, well educated – I am happy with this. I saw a few good things, chances we created and a few good defensive actions and good individual performances from one or two players.

"But we have to work, that is clear. In the first half especially, I was not happy with the team play. In a game like this, if the only situations you have are because of the individual quality of the player then something is wrong.