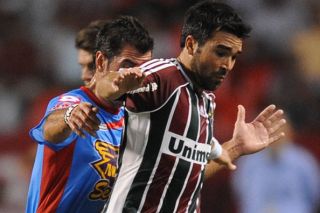 The Brazilian-born star enjoyed a glittering 17-year career with significant spells at Barcelona, Chelsea and Porto, before returning to his homeland to finish his career with Fluminense.

Deco won an array of trophies during his career in two Champions League titles, the UEFA Cup and eight league titles in four countries, while also helping his adopted country Portugal to the Euro 2004 final on home soil.

"With a lot of sadness and hurt I am announcing the end of my professional career," Deco said on Monday.

"I've been really happy during this time and I wanted to help Fluminense more but my body won't allow that.

"My muscles can no longer put up (with the demands of professional football)."

Deco helped Fluminense become Brazilian champions last season, adding the 2012 Serie A title to his 2010 championship with the club from Rio de Janeiro.