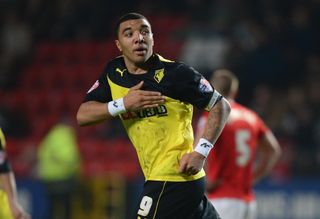 The 26-year-old had been heavily linked with a move away from Vicarage Road during the transfer window, with Premier League new boys Leicester City, QPR and Burnley all linked to the striker.

However, Deeney has agreed fresh terms on a contract that runs until 2018 with the Championship outfit.

"[Watford] are delighted to confirm that club captain Troy Deeney has committed himself further to Watford FC by today signing a new four-year contract," read a statement on the club's official website.

"The 26-year-old striker feels that he can realise his Premier League ambitions with the Hornets - a view endorsed by senior club officials and, without doubt, all Watford supporters."

Watford secured the signature of Deeney from Walsall for a reported initial fee of £250,000 in August 2010.

He has since gone on to be a prolific marksman for the club, scoring 62 goals in 138 starts for Watford.

Deeney has already struck twice in four Championship outings this season, including in last weekend's 4-1 victory over Leeds United.