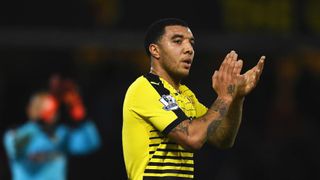 Watford striker Troy Deeney says he will not be joining Arsenal in January, but has welcomed the speculation over his future at Vicarage Road.

Alongside strike partner Odion Ighalo, the Watford skipper has played a key role in helping the club to ninth in the Premier League after 20 games of the season.

Having waited until late October to register his first top-flight goal, Deeney has since taken his league tally to six, while Ighalo is among the league's leading scorers with 14 to his name.

Both have been linked with moves away, but Deeney dismissed the prospect of leaving amid reported interest from leaders Arsenal.

Asked whether he was Arsenal-bound, Deeney told talkSPORT: "No, no, no. We have still got a project to complete.

"The pleasing thing from my point of view and from Iggy's is people want us. That shows that we have been doing something right for the past five, six months.

"But we have got a project to complete and the gaffer has stated before that whatever happens in the summer, will happen in the summer.

"It is very flattering. My son is an Arsenal fan so he read it in the paper the other day and I don't think he is happy that I am staying at Watford.

"He doesn't understand that it is not FIFA and you can't change [clubs] the same day."

Team-mate Ighalo also played down the prospect of leaving this week, but acknowledged he would find Manchester United tough to turn down if they came calling.

Deeney added: "I think his comments [about United] were taken out of context a little bit. He isn't going to leave in January.

"The manager and the owner have made that clear. I have just seen him at the school run and he is in no rush to get away anytime soon."