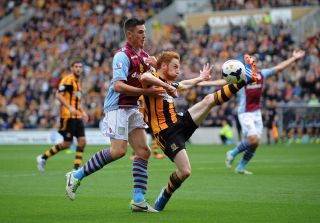 Paul Lambert’s side battled to avoid relegation from the top flight last term, but three wins from their opening seven games at the start of the new campaign have given grounds for optimism this time around.

And defender Clark, who put in a solid display in Villa's goalless draw at Hull City last weekend, is confident they can kick on.

"The whole team is chuffed with a clean sheet," the 24-year-old told the Birmingham Mail. "It’s the second one in three games.

"Everyone is really happy with that. They didn’t cause us too many problems.

"The team is a year older. We have some fresh faces in and we are still coming together as a team.

"But we are a year older and hopefully we are still improving.

"We are learning from some of the mistakes last season. We are a young side and we’ve had a tough start this season but I think we are progressing and moving forward."