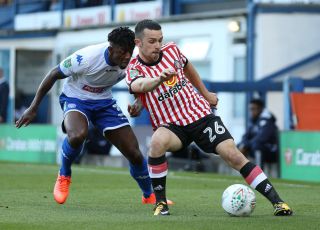 Derek McInnes has found a replacement for Max Lowe after securing NAC Breda defender Greg Leigh on a year-long loan.

Derby defender Lowe was a major hit for the Dons last season but has returned to the Rams, forcing Pittodrie boss McInnes to look elsewhere to fill his left-back slot.

He hopes he has now found the solution in the shape of former Manchester City trainee Leigh after striking a deal that could be made permanent in 12 months’ time.

McInnes told the Aberdeen website: “We’ve been aware of Greg for a while and in January when it looked as though Max was staying at Derby, he was someone we were quite far down the road with.

“He’s versatile, gives us a bit of athleticism, has decent experience for someone with his best years ahead of him and he sees Aberdeen as the right move at this stage.

“There were a number of clubs in England keen to take Greg but I felt he bought into what we’re trying to do early on in our conversations.”

Leigh has flown out to Cork to meet up with his new team-mates and take part in the Dons pre-season training camp.

The former England under-19 international spent more than a decade in the City academy and even featured under former boss Manuel Pellegrini in a series of 2014 pre-season friendly games, including clashes with Dundee and Hearts.

After spells with Crewe and Bradford, he joined Bury in 2016 and went on to make more than 100 appearances for the Gigg Lane side before making his switch to Holland last year.