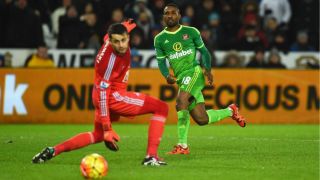 Jermain Defoe never doubted he was the man to lead Sunderland's attack in their battle against relegation from the Premier League, even when the goals dried up.

The 33-year-old's ability to lead the line for Sam Allardyce's side was called into question by some when he went seven league games without scoring in August and September.

But the former England forward always believed in himself, especially after the arrival of Allardyce in place of former coach Dick Advocaat in October.

"I knew that, given the chances, I would score goals. I always have done," Defoe said.

"Sam came in and I remember him saying, 'Jermain's a goalscorer, we all know that but in football you need more than that.'.

"So, yeah, it was frustrating but it was just down to me to show the manager that I'm good enough to play in the team - that I can play that lone striker role."

He added: "Dick pulled me aside, and he said, 'I don’t believe that, in this team, you can play up front on your own'.

"I said I'd been a lone frontman for England and for Tottenham and scored a lot of goals. I scored a hat-trick against Bulgaria at Wembley playing that role for England.

"Dick was like, 'well, that’s my opinion' and I was, 'I think you’re wrong'. Hopefully Dick’s watching the games now."