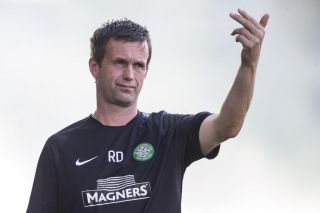 Having lost 4-1 in the first leg in Warsaw last week, Celtic were unable to get close to Legia on Wednesday, conceding a goal in each half to eventually lost 6-1 on aggregate.

Deila bemoaned Legia's "two easy goals", admitting Celtic's defensive work is not up to scratch ahead of their Scottish Premiership season, which begins on August 13, while the Norwegian added the Glasgow-based side did not deserve to qualify for the Champions League group stage.

"We have to perform much better than that. We have to win the league."

Celtic were aiming to qualify for the Champions League group stage for the third season in a row but fell at the penultimate hurdle, as Legia advanced to the play-off round.

The Polish champions' two goals at Murrayfield in Edinburgh - Celtic Park was unavailable following its Commonwealth Games commitments - were disappointing from Deila's perspective.

Michal Zyro's opener in the 36th minute came after a simple ball over the top of Celtic's defence from Michal Kucharczyk.

In the 61st minute it was 2-0 with Kucharczyk sneaking in on the blind side of a couple of Celtic defenders to pick up Zyro's pass before rounding goalkeeper Fraser Forster and sliding the ball into the net.

"It was not good enough," Deila said.

"They started OK and put them under a little bit of pressure but they didn't create anything.

"They got two easy goals, again, and that's worrying me. We just have to say we lost to the better team. The boys want to play better."