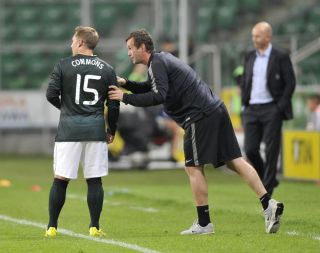 Deila's side started well in the first leg of their Champions League third qualifying round tie on Wednesday with Callum McGregor opening the scoring for Celtic in the eighth minute with a thumping strike.

But just two minutes later, Legia equalised when Miroslav Radovic beat Celtic goalkeeper Fraser Forster at the near post and, according to Deila, the visitors never recovered.

Radovic put the hosts in front in the 36th minute after a scramble in the box, while Celtic defender Efe Ambrose was sent off with a minute until half-time.

"I'm unbelievably disappointed. I think we started quite well and got the first goal and then we conceded an easy goal," Deila said after the match.

"From there, we lost our heads and started to lose the ball in the centre of the pitch so many times. We also didn’t stay together as a back four.

"They got easy chances and in the end we also got the red card and it was a totally different match in the second half."

Michal Zyro and Jakub Kosecki both scored for Legia in the second half, while Ivica Vrdoljak missed two penalties, as the home side completely dominated Celtic.

"We started the second half okay but again in many situations we weren't together as a team. When we were pressing, some were high and some were low instead of being together," Deila said.

"It was a very poor performance and worst of all was the commitment and energy – we needed much more energy in the game.

"We didn't stay together for 90 minutes and that's what concerns me most. What's done is done and we have to learn from this quickly."

The Scottish Premiership champions are looking to qualify for the Champions League group phase for the third straight season and started their qualification campaign in comfortable fashion with a 5-0 aggregate victory over KR Reykjavik.

But Deila's men face an uphill battle to turn around their third round qualifying tie after Wednesday's loss in Poland, although the Norwegian manager has not given up of reaching the final play-off round.

"We got an away goal and we still have a chance if we go to Murrayfield and give everything and have the supporters behind us, which I know we will," he said.

"We will try everything we can to win the game."