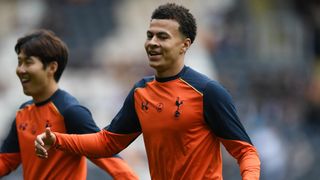 Dele Alli insists Tottenham will be able to compete for silverware next season even without spending big money in the transfer market if their current crop of players stick together.

An impressive campaign saw Spurs finish second to Chelsea in the Premier League with 86 points, a second straight top-three finish under Mauricio Pochettino.

Pochettino said last week that Spurs would still be unable to compete on wages with the top clubs and may have to take risks on younger players to improve.

But Alli, who has been linked with a move away, is confident Tottenham will be able to compete without splashing out, given the quality they already possess.

"With the players we have got here, we don't need to go out and spend loads of money," the 21-year-old told reporters.

"There is a good bunch of players here. Everyone is determined, everyone works hard and there is a lot of quality in the team – you can see that with the amount of goals we have been scoring.

"It is important we stick together, keep working hard and keep improving. We have to take our form from the end of this season into next season and start even stronger.

"Then, if we can finish as well as we did this season, we should be OK. It is a great place to be and everyone is determined to work for this manager and for the team, so it is good."

One disappointment in Spurs' season was the failure to progress past the Champions League group stage, a performance Alli knows his side must improve in 2017-18.

"It was a disappointing season for us in the Champions League this year but it is a great chance to learn," Alli, who scored 22 goals in all competitions, added.