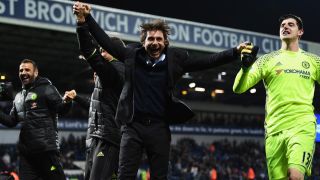 Antonio Conte revelled in Chelsea's "great achievement" before his players dragged him back into their Premier League title celebrations.

An 82nd-minute goal from Michy Batshuayi gave Chelsea a 1-0 win at West Brom on Friday, securing their sixth top-flight title.

Conte was delighted by his team's season but his post-match news conference was kept short, as Diego Costa, David Luiz and John Terry arrived to playfully drag their Italian coach away.

"I celebrated with my players which is normal after a great achievement like this," he said.

"They wet me after the celebrations with the fans, they poured champagne and beer over me so I had to change my clothes, my suit is a disaster now.

That is all from Antonio Conte's press conference - as Diego Costa, David Luiz and JT arrive to drag him away!! May 12, 2017

"I'm enjoying it a lot because when you put a lot of passion, enthusiasm and hours into your work, and you don't sleep, when you arrive in the moment it's only right to celebrate with my fans, staff and the club.

"It's a dream which is coming true."

Chelsea had an unlikely hero as Batshuayi came off the bench to score just his second league goal of the season.

Conte was thrilled for the Belgian, who has battled to have an impact since his reported €40million move in July.

"It's great, I'm pleased for him because we all know the difficulty he found in his first season. It's not easy to play in this league," he said.

"For him I'm pleased because he's scored two goals, this one was very important for him and us. It's great because it's not easy in one moment to change the game. I did this to try to win and Michy repaid me a lot for my choice.

"Also Willian's impact was very good. It means I trust my squad and this season we have had three competitions – league, FA Cup and Capital One Cup.

"For this reason certain players didn't have a lot of time but they worked very hard, Michy is a great example. I'm very happy for him because to score a very important goal is great."