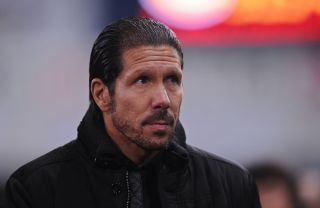 A hard-fought 2-1 win at San Mames on Wednesday gave Atletico a 3-1 aggregate victory and saw them reach the semi-finals.

Simeone was full of praise for Bilbao after the clash, but hailed his team for how well they performed after the break.

"We have played against a great rival. Athletic Bilbao have an amazing team," Simeone said.

"I can tell you that in the first 30 minutes we had control of the pitch, but not the ball, and we had a great opportunity when Diego Costa was one-on-one with the goalkeeper after just five minutes.

"Also there was a chance for Raul Garcia, but in the last 10 minutes of the first half, Athletic had great opportunities.

"In the second half we started very strong and well, then we scored a goal which gave us; much more confidence, strength, and we won a game in a very difficult stadium."

Atletico face Real Sociedad in La Liga on Sunday on what could be a defining weekend for the top three sides.

Simeone said he was unsure which players would be available for the league clash given his team's busy run of fixtures.

"First of all, we have to wait and see (who will start against Sociedad) because we have Oliver (Torres) injured and Filipe Luis," he said.

"The rest will be fit for Sunday, but we have to wait until Friday, but it is normal to have some problems when you are playing in three competitions like we are dealing with now.

"The players are not machines, but again I have to admit the work rate of the players shows 100 per cent commitment because today to overcome a result like that one and in the way they did, I just have to thank the team."