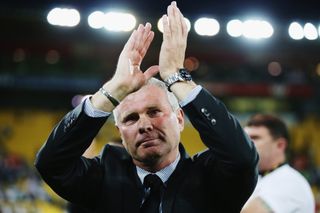 Herbert's eight-year tenure ended with a 4-2 defeat in the second leg of their play-off against Mexico in Wellington.

Mexico had all-but sealed their passage to Brazil with a 5-1 victory in the first leg and Oribe Peralta's first-half hat-trick at the Westpac Stadium put them out of sight.

New Zealand showed some fight and after Jeremy Brockie was denied from the penalty spot, Chris James and Rory Fallon pulled goals back before Carlos Alberto Pena had the final say.

Herbert had no complaints after New Zealand were consigned to a 9-3 aggregate defeat to a side ranked 55 places above them in the world rankings.

He said: "Pay a massive tribute to the Mexican team, enjoy Brazil,

"You've deserved it; you've been the better team across both ties."

New Zealand were the only unbeaten nation in the 2010 World Cup in South Africa under Herbert and the 52-year-old believes the team have made great strides under his leadership.

He added: "We're very thankful for a superb turn out (at the Westpac Stadium). I’m going to wake up in the morning and think the game is in an incredibly healthy position.

"A very inexperienced team showed some wonderful potential and showed a great deal of appetite against a side (Mexico) where you can make very good comparisons.

"The last 45 minutes was incredibly refreshing. I'll walk away and be incredibly proud of it."