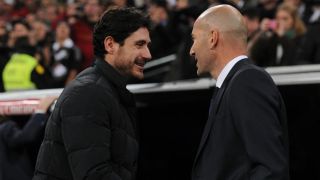 Deportivo La Coruna head coach Victor Sanchez has extended his contract at the Riazor until June 2017.

The former Spain international replaced Victor Fernandez at the helm in April and successfully avoided relegation to the Segunda Division, while Deportivo have emerged as unlikely European contenders in 2015-16.

Victor's contract was due to expire at the end of the current season, but an agreement has been reached that will see him take charge for the following campaign.

"Our relationship with Depor goes far beyond what's written on paper," he told the media after his new deal was announced.

"What's much more important is that we have the feeling of wanting to share many more years together - that's all that the coaching department has in our head.

"The motivation we have is to spend as much time as possible here, helping Depor to grow."

President Tino Fernandez added: "It's a moment of joy and satisfaction. If I had my way, there would be no other Deportivo coach while I am here."