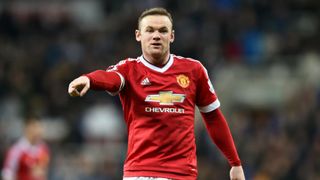 Wayne Rooney says he is prepared for a battle when Manchester United visit the iPro Stadium to face Derby County in the fourth round of the FA Cup on Friday.

United laboured to a narrow victory in the previous round of the competition, requiring a 93rd-minute penalty from Rooney to edge past League One side Sheffield United after managing just two shots on target.

Louis van Gaal blamed the Blades' deep-lying defence for his team's inability to put their third-tier opponents to the sword, but those difficulties in front of goal have been persistent this season - United produced one effort on target as they lost 1-0 at home to Southampton in the Premier League on Saturday.

Rooney admitted the team found it tough in the previous round, and, although United have won each of their last six FA Cup meetings with Derby, he expects another tough test on Friday.

The United captain – who has scored five goals in his last five matches in all competitions – hopes the team's collective ability will be enough to see them through.

"I'm sure they will be really up for it with their crowd and we will be up for it as we've experienced these games," Rooney told MUTV.

"Derby have nothing to lose. No one is expecting them to win and they will try to cause an upset. We know that and have to be ready for that.

"It will be a difficult night for us, Sheffield United at home was a tough game, so we have to be ready to battle and win the battle. Hopefully then our qualities will show through."

Derby go into the game on the back of a disappointing 4-1 defeat to fellow promotion chasers Burnley in the Championship.

Manager Paul Clement, however, is excited to have the chance to bounce back against United and overcome them for the first time in this competition since 1897.

"What a challenge, to play one of arguably the biggest clubs in world football. It's clear they're not having the best time themselves at the moment, but it's an opportunity for two teams to come together and put in a performance," he told Rams Player.

"It's going to be nice to put ourselves up against a very good side with world class players, and a fantastic coach in Van Gaal."

Clement has recent experience of the pressures facing coaches at the world's top clubs, having served as Carlo Ancelotti's assistant at Chelsea, Paris Saint-Germain and Real Madrid.

And the Derby boss believes his Dutch counterpart is tough enough to sustain the heavy criticism coming his way during United's recent struggles.

"He's one of the most outstanding coaches there's been in recent times in world football, he's managed at the very, very highest level at some of the biggest clubs in the world.

"What he's going through at the moment will be difficult, but he has a lot of experience of these kind of situations."

Derby could hand Marcus Olsson a debut following his transfer from Blackburn Rovers this week.