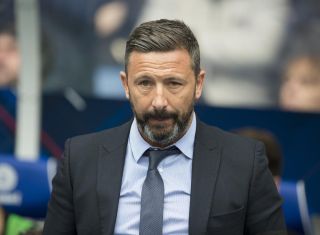 Aberdeen manager Derek McInnes is far more concerned with boosting his side’s European targets than worrying about a potential title party at Pittodrie.

Celtic only need a point from their trip to the Granite City on Saturday to wrap up their eighth consecutive Ladbrokes Premiership crown.

Aberdeen are also looking to continue an impressive sequence as they bid for a sixth successive season in Europe and need to hold off the challenge of Kilmarnock to guarantee that before the William Hill Scottish Cup final.

McInnes, whose side have a three-point lead over Kilmarnock, said: “It’s a game for our own purpose. It is very important for us.

“We’ve only got three games left and we’ve clearly got work to do to satisfy our own needs.

“As a consequence, with the way the fixtures land now, Celtic can win the league here and the likelihood is they’re going to win it somewhere, but we don’t have any thoughts other than just trying to gain for ourselves and to get a positive result.

“I don’t think it comes into the players’ minds too much. I’m just trying to look after Aberdeen and make sure we get the points for our cause.

“That’s what we’ve got to do, concentrate on ourselves. The game’s tough enough anyway and I’m pretty sure Celtic will be eager to get that done as quickly as possible.

“For our own objectives we’re trying to make sure they celebrate next week because it’ll mean we’ve won the game and that’s what we’re going to work hard to try and do.”