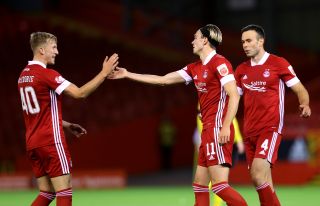 Derek McInnes described Ross McCrorie as a “dream” signing who he loves watching in an Aberdeen jersey after the Scotland Under-21 player shone in victory over Hibernian.

After playing predominately in defence since arriving from Rangers, 22-year-old McCrorie imposed himself in central midfield, protecting his defence, winning the ball, and helping launch attacking moves.

“I just love the boy,” McInnes said. “I think he’s a dream on and off the pitch.

🔴 Our Man of the Match as picked by Steve Cowan in our Matchday Live coverage is Ross McCrorie.— Aberdeen FC (@AberdeenFC) August 30, 2020

“He is different. He didn’t want to be in the shadows, he didn’t just want to be a Rangers squad player, he wanted to get out and get on with his career, and I love that about him.

“He deserves a lot of credit for that, because I know Rangers see qualities in him, but the fact Ross was in such a hurry to get on and get out is testament to him.

“And he’ll get his rewards for that, because young boys at that age, 20-23, need to be playing games to fulfil your career. If you’re not playing games at that age then you’ll not have the career you’re capable of.

“He is now getting the opportunity to play games for us on a regular basis and he will only get better. I just love him in an Aberdeen shirt, absolutely love him.”

McCrorie spent much of last season playing at right-back on loan for Portsmouth but the way he performed at Easter Road suggests midfield could be his long-term home.

“Having Ross’s power and intelligence in there allows us to play with one or two more attacking players.”