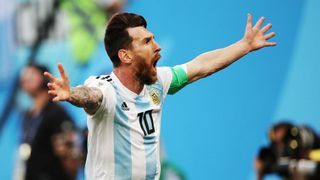 Didier Deschamps is hopeful France can "mark and neutralise" Argentina's Lionel Messi on Saturday, but accepts the superstar can provide a "spark" out of very little.

France secured their spot in the knockout phase early on and were able to rest players against Denmark in their final group game, something Argentina were unable to do.

Messi provided fleeting moments of brilliance against Nigeria, giving Argentina the lead with a sumptuous opening goal, as they ultimately went on to win 2-1 thanks to Marcos Rojo's crucial late goal, securing a date with France in Kazan.

And while Argentina have impressed few en route to the last 16, Deschamps knows Messi alone has the ability to end France's run.

"Messi is Messi," Deschamps told reporters at the Kazan Arena on Friday.

"Look at his stats, 65 goals in 127 matches, it's that straightforward. Hopefully, we'd like to mark and neutralise him, but he can make the difference with very little.

"When you play Argentina and Messi, there are several ways to limit his impact, at least. But their team is highly experienced, we talk about Messi, but [Javier] Mascherano has lots of caps, so is used to the pressure.

"We have a lot of inexperienced players, it's not an excuse, it's reality. We'll do our utmost for things to go well tomorrow."

In all likelihood, Deschamps' defence on Saturday will contain three players – Lucas Hernandez, Samuel Umtiti and Raphael Varane – who either play alongside Messi or regularly line up against him in LaLiga.

But Deschamps does not necessarily think that is an advantage.

"I hope to answer your question after the match with a 'yes'," Deschamps said. "I'm not sure it's an advantage, but it's not a disadvantage.

"Messi plays in Spain, we know he makes a difference, but if you've played against him then maybe you're aware of situations that can repeat on the pitch.

"But Messi is Messi, with his talent, he may send a spark with very little and make the difference. He is unpredictable."