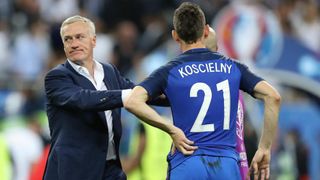 France head coach Didier Deschamps found it tough to describe the disappointment at losing the Euro 2016 final to Portugal on Sunday.

The host nation were beaten 1-0 at the Stade de France thanks to Eder's superb strike in the second half of extra time.

Portugal, who lost captain Cristiano Ronaldo to a knee injury in the first half, were on the defensive for much of the match, and Andre-Pierre Gignac almost snatched victory for France when he struck the inside of the post in second-half stoppage time.

Deschamps conceded his side were made to pay for failing to take their opportunities and said it will take some time to overcome the sadness of the result.

"There are no words, the disappointment is immense. It will take time to digest it," he said to M6 and beIN Sports after the match.

"Even if we were missing a little bit of energy tonight, it's not an excuse, we had opportunities, the last was Gignac. After that we continued, it was a very tight match and we had our chances even if the Portuguese had their own opportunities as well.

"They scored, unfortunately. It's very disappointing, we can't throw it all out but we missed a big chance here. Maybe not unique, but a very big chance to be champions of Europe.

"We won together, we suffered together and today we lost together. We know we've got the French excited, it would have been amazing to offer them this trophy at home, but unfortunately it's not to be."