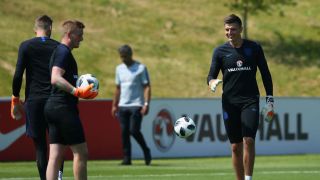 Nick Pope is willing to play the long game in his bid to become England's number one.

Burnley goalkeeper Pope enjoyed a breakout campaign in the Premier League, with his performances earning him a place in Gareth Southgate's final 23-man World Cup squad.

But the 26-year-old is yet to make his international debut, with Jordan Pickford - who started against Nigeria in Saturday's friendly - handed the number one shirt for the tournament.

That will not curb Pope's enthusiasm, though, as he looks to become first choice between the posts at some stage in his international career.

"We get on really well and we're pushing each other every day, which is what is best for the team. We enjoy training together," Pope said of the goalkeepers in the squad.

"With Tom [Heaton, Burnley team-mate on standby], there are four great characters. Training each day is hard but we're pushing each other and that's the way it should be.

"We'll have to wait and see what happens, it's obviously out of my hands. I'll have to see what I can do over the next few weeks, few months or years to see if I can put myself in to a position to be number one.

"It's one small step at a time. I'm happy to be in the squad now but I obviously want to push on as well."

Pope is embracing the opportunity to be part of England's squad for the World Cup - but insists he is not travelling to Russia simply to make up the numbers.

"Since I came in to the set-up in March, I've just been trying to get used to new training techniques," he said. "I've been training with top quality players so it's been enjoyable.

"I've come in to a new group of people, a new group of players, so everything has been new to me. It's been on another level and it doesn't get any harder than England. To be in and around this level, it's great for me.

"I always want to play, whether that's with my club or while I'm away with England. I'm always looking to play and I always prepare as though I'm playing. We'll have to wait and see."