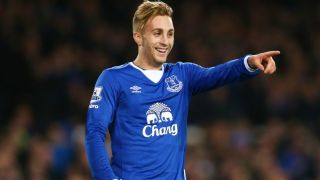 Everton manager Roberto Martinez has defended Gerard Deulofeu after the winger was booked for simulation against Stoke City on Monday.

Deulofeu scored a goal in Everton's 4-3 loss at home to Stoke but also received a yellow card for diving, which is not the first time that has happened this season.

The 21-year-old went down despite not being touched by Ryan Shawcross and Martinez has come out and defended his fellow Spaniard, insisting he is not a cheat.

"Shawcross sticks the leg out and Gerry almost expects contact, so the instinct takes over," Martinez said.

"It is a different way of teaching young players and teaching them that they need to stay on their feet until the contact takes you down, is very different.

"But it’s not a way to try to cheat. It was a one-v-one in front of the goal, and he wasn’t getting an advantage by going down.

"I think sometimes it is a bit unfair that kind of action gets highlighted because in the previous six actions, that no-one shows, they have been kicked."