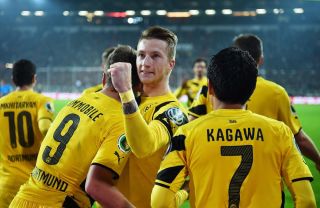 Saturday's 1-0 home defeat to Hannover in the Bundesliga was Dortmund's fourth consecutive league defeat and their sixth in nine matches this term - leading coach Jurgen Klopp to acknowledge the club were in a "critical situation".

However, goals from Ciro Immobile, Marco Reus and Shinji Kagawa helped Dortmund get back on track at the Millerntor-Stadion against second-tier St Pauli.

Immobile's close-range finish in the 33rd minute earned Dortmund the lead their possession warranted, after the Italian had seen an earlier effort ruled out for offside.

The former Torino man turned provider for Reus shortly before the interval, putting the visitors firmly in control.

Klopp's men never looked likely to relinquish their advantage and Kagawa added a third goal with four minutes remaining to put the result beyond any doubt.

Dortmund threatened down the flanks early on courtesy of Kagawa and Erik Durm, with the two combining after eight minutes for the Japan international to fire wide.

The visitors continued to dominate and looked to have opened the scoring when Immobile turned home Sokratis Papastathopoulos' cross from the right - only to be ruled offside.

Henrikh Mkhitaryan's strike was tipped wide by Philipp Tschauner 20 minutes in before Immobile eventually got his goal.

After some slick interplay down the left, Kevin Grosskreutz's cross found Kagawa, who turned the ball into Immobile's path to deservedly put Dortmund ahead.

The hosts enjoyed a brief foray into Dortmund's half when John Verhoek brought a long ball down inside the opposing area - only to be crowded out - before Soren Gonther's header was well saved by Mitch Langerak.

However, Dortmund pulled further clear shortly before the interval when Immobile cut a cross back for Reus to side-foot home.

Daube had an effort saved well by Langerak early in the second half as St Pauli looked to gain a foothold in the tie.

Thomas Meggle's men offered a great deal more than they had prior to the break but were unable to break down Dortmund's defence, who coped well with any threat from the home side.

Klopp was able to bring Reus and Mkhitaryan off with plenty of time to spare before Kagawa added a third, following a dismal clearance from Tschauner.

The Dortmund boss now turns his attention to Saturday's clash with champions and Bundesliga leaders Bayern Munich at the Allianz Arena.