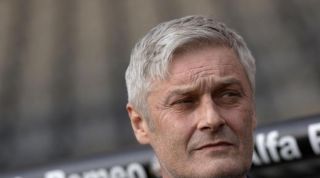 Bochum went into the match in decent form after starting their league campaign with two consecutive wins and they put on a determined display against their more illustrious opponents.

Simon Terodde has been in good form so far this term, netting three in his two 2. Bundesliga outings and he was the hero again on Saturday.

The close-season signing from Union Berlin opened the scoring with nine minutes on the clock and he eventually doubled his tally just after the break, earning Bochum a spot in the second round.

There were few other major upsets to consider, though FSV Frankfurt and Sportfreunde Siegen did play out a six-goal thriller at the Leimbachstadion.

Despite initially falling 2-0 down, Frankfurt brought themselves level and even went ahead at the start of extra-time.

Sportfreunde grabbed an equaliser with 118 minutes on the clock, but they ultimately came unstuck on penalties, losing 8-7.

Henrikh Mkhitaryan, Adrian Ramos and a double from Pierre-Emerick Aubameyang earned the victory, but the biggest talking point was the return to competitive action of Marco Reus and Neven Subotic, with the latter back after nine months out.

Hertha Berlin suffered a scare at Viktoria Koln as they conceded twice when 3-0 up, but Julian Schieber's 76th-minute goal secured a 4-2 triumph.

Marcelo received his marching orders in the 39th minute and the two sides were level at 1-1 going into the final 15 minutes, but a quick-fire double from Lars Stindl and Joselu gave Hannover the victory.

A brace from Branimir Hrgota helped Borussia Monchengladbach ease past Homburg 3-1, while Eintracht Frankfurt emerged 2-0 victors from their encounter with Viktoria Berlin.

Eintracht Braunschweig, who were last season relegation from the Bundesliga, won 1-0 to edge past fifth-tier side Bremer SV, while Optik Rathenow – who play at the same level – lost 3-1 to visitors St. Pauli.

FC Koln recorded the most convincing win of the day as they thrashed FT Braunschweig 4-0 on the road, while 3. Liga club Wehen Wiesbaden forced Kaiserslautern all the way to penalties after a 0-0 draw, before losing 5-3 in the shoot-out.

Greuther Furth also made it into the next round, cruising past minnows Waldkirch in a 3-0 triumph.