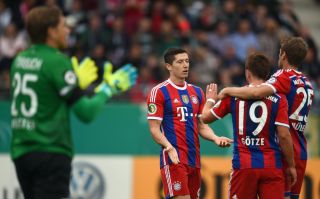 Gotze etched his name into German footballing folklore by netting in extra-time against Argentina at the Maracana a little over a month ago, and was on hand to get Bayern's defence of their DFB-Pokal crown off to a comfortable start when he opened the scoring on Sunday.

Bundesliga champions Bayern were tested early by a Preussen outfit who sit 12th in Germany's third tier, but normal service was resumed after Gotze's 19th-minute header.

Manuel Neuer was required to produce two good stops prior to the goal, but Bayern pressed on after going ahead and added a second courtesy of a cool finish from another of Germany's World Cup heroes - Thomas Muller - 10 minutes later.

David Alaba got on the scoresheet early in the second half with a well-struck effort from outside the area before Claudio Pizarro scored with a delightful chip.

Rogier Krohne got a late consolation from the penalty spot for Preussen, who then had Marc Heitmeier sent off for bringing down Robert Lewandowski in the area - only for the Pole to spurn the chance to score his first competitive goal for Bayern from 12 yards.

The result helps erase some of the disappointment from Pep Guardiola's side's DFL Supercup defeat to Borussia Dortmund - and gets their hunt for a third consecutive Pokal success under way.

Preussen did not appear overawed early on in the first-round tie, retaining possession well against a Bayern team that included five of Germany's World Cup winners.

Krohne had Preussen's first effort on goal with a powerful drive that was kept out well by Neuer before Gotze was denied twice in quick succession, first by goalkeeper Daniel Masuch and then Dominik Schmidt.

Guardiola was visibly exasperated as Preussen were again allowed an effort on goal soon after - Marcel Reichwein's drive tipped round the post by Neuer having cut in from the left.

However, the Bayern coach saw his side move ahead when Gotze ghosted into the area unmarked to head home Lewandowski's cross from the right.

Muller doubled the German champions' advantage shortly before the half-hour mark - steering home his 100th Bayern goal after Jens Truckenbrod's tackle fortuitously diverted the ball to him inside the area.

Pizarro then added a fourth with an expert chip 17 minutes from time, and Guardiola brought captain Philipp Lahm, Xherdan Shaqiri and Holger Badstuber - making his first start since December 2012 - off before Boateng gave away a late penalty that was converted by Krohne.

Marc Heitmeier felled Lewandowski when through on goal and was subsequently dismissed before the former Dortmund man's tame effort from the spot was kept out by Masuch.