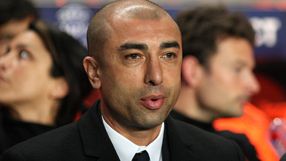 The game will be Chelsea’s third in six days after Sunday’s FA Cup semi-final with Tottenham Hotspur and Wednesday’s Champions League semi-final clash against Barcelona.

"Both David Luiz and [Didier] Drogba will miss the game against Arsenal. Drogba picked up a knee injury against Barcelona and we will need to assess him over the next couple of days," said Di Matteo.

The Ivorian striker has come in for criticism regarding his theatrical performance against Barcelona, in which he scored the winning goal, but his boss believes that criticism to be unfair.

"Everybody is entitled to an opinion, but he was marked by two men for most of the game and came under a physical battering, so we have to be objective in our reaction,” said the Italian.

"Our players are fair. Everybody has their own style but we are a fair team. He was very helpful to the team [against Barcelona], gave us an outlet and scored a vital goal so we were pleased.”

The fixture list doesn’t get any easier for Di Matteo after Saturday, as Chelsea travel to the Camp Nou for the second leg against Barcelona on Tuesday before a crucial match-up with Newcastle United, not to mention the FA Cup final against Liverpool on May 5.

And Di Matteo was quick to praise his experienced players, who seemingly are playing their final season together.

“It's very challenging, but exciting as well. If we had been told six weeks ago that we'd be in this position, we would have been happy, but it's very intense period with a lot of games.

"The drive and motivation of the players to finish the season as well as possible helps," said Di Matteo. "I've tried to prepare them as best I can physically and mentally, belief and confidence comes from winning games, I try to communicate with them, and wins reinforce that.

"It's important for the club to be in the Champions League next season, we've had a difficult time in the Premier League, we're trying our best to make up points and we have, but there's not much time, we have to try our best and pick up as many points as possible.

"We had to believe, we knew we had the quality but we were in a precarious position. To turn the Napoli game around was difficult but we managed it, and to lose only one game on the way, we have to be happy."

Chelsea will also be without defender Branislav Ivanovic, who is serving a three-game suspension after clashing with Wigan Athletic’s Shaun Maloney earlier this month.