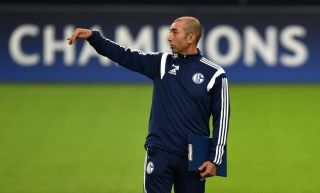 Bundesliga side Schalke have taken two points from matches against Chelsea and Maribor in their opening two Group G matches.

Di Matteo will now take charge of the Gelsenkirchen side for the first time in European competition since replacing Jens Keller as head coach earlier this month.

The 44-year-old, who led Chelsea to Champions League glory in 2012, is content with Schalke's position, but believes the club's hopes of progressing in the competition could hinge on the two games with Sporting.

"In the Champions League you've got to try to win at home because winning away is tough," he said ahead of Tuesday's encounter at the Veltins Arena.

"I still think Maribor are in the competition, but the two games against Sporting will be very important.

"Sporting are a technical team, playing a 4-3-3 and they like having the ball. It is up to us to deny them."

Di Matteo's first match in charge of Schalke ended in a 2-0 victory over Hertha Berlin on Saturday and striker Klaas-Jan Huntelaar believes the team have added confidence after starting the new boss' reign with a win.

"The victory gives us confidence for the Champions League," the Dutchman, who scored the opener against Hertha, said. "Because we did not win against Maribor we have to get three points against Sporting."