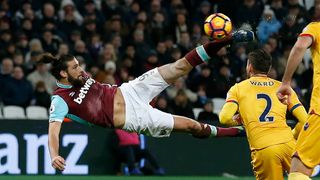 Slaven Bilic has confirmed Andy Carroll sustained whiplash during West Ham's 3-0 win against Crystal Palace, the game in which he scored with an incredible scissor kick.

Carroll's stunning volley, a goal of the season contender, wrapped up the points for West Ham, but the striker is a doubt for Saturday's trip to Middlesbrough as a result of his injury.

Bilic is hoping Carroll, who has scored three goals in the 2016-17 campaign, will recover in time to play at the Riverside Stadium.

"He's got a whiplash injury, that's what I was told from the physios," Bilic told Sky Sports News.

"Then I went to the dictionary basically to find out what that is. It was a sore neck, but hopefully he will be okay. It was at the end of the game, I don't know how he got it.

"He then trained Tuesday very hard, he was brilliant in training, but then reported some neck pain. But as I say, hopefully he will be okay."

Bilic is also waiting for news on the fitness of Winston Reid, Sofiane Feghouli and Sam Byram as West Ham seek a third Premier League away victory of the season.

"We have a few [players] with knocks," said Bilic. "Winston Reid has a painful one and Sam Byram has a knock on his knee, it was swollen and he missed training on Wednesday.

"Also Sofiane Feghouli missed training on Wednesday because of a minor problem with his Achilles. But I'm very optimistic that all of them are going to be fit for the game on Saturday."