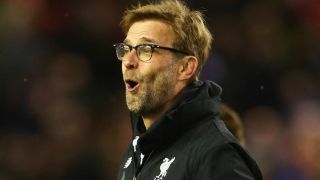 Liverpool manager Jurgen Klopp says Stoke City reverted to their old style of play in Tuesday's League Cup semi-final and felt Marko Arnautovic's goal should have been ruled out for offside.

Arnautovic's strike in the 45th minute at Anfield levelled the aggregate score at 1-1, with a penalties needed to decide which team moved into the final.

Marc Muniesa had his spot-kick saved by Simon Mignolet in sudden death, with Joe Allen then converting to win the shoot-out 6-5 and send Liverpool to Wembley next month.

Klopp said it was tough to play against a Stoke side that went into the game with a different approach than usual under manager Mark Hughes, with Peter Crouch given a rare start up front for the visitors.

"It was a special game, I think a good game from my side against a side who are real difficult to play [against]," Klopp told Sky Sports.

"I heard they changed their style [under Hughes], but today they played old Stoke football I would say.

"From [goalkeeper Jack] Butland to Crouch, it was really, really difficult to defend in our situation and so we had a few problems but I don't think they had too many opportunities.

"We tried to play football – first half we should have played much more..."

Stoke's goal could well have been ruled out, with replays showing Arnautovic was in an offside position before netting past Mignolet.

"The goal I think everybody knows it was double offside and that is unlucky for us, but the team struck back again and did really well," Klopp said.

"At the end in a penalty shoot-out you always need luck and we had it.

"I think over the whole 120 minutes with all the games in our legs from the last month, the players really deserved it, the crowd deserved it, and Liverpool deserved it.

"It is a great moment for us, it feels great. Hard work, but it is never easy to make a final so I take this game for what it is – difficult, but deserved.

Liverpool will play either Everton or Manchester City in the final, with their Merseyside rivals holding a 2-1 advantage over Manuel Pellegrini's men going into the second leg at Etihad Stadium on Wednesday.