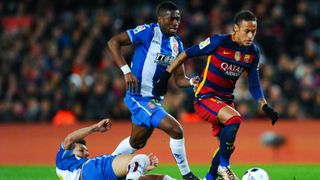 Espanyol midfielder Papakouli Diop insists comments made about injuring Barcelona players were taken out of context.

Diop was sent off in Wednesday's 4-1 Copa del Rey defeat after swearing at Barca striker Luis Suarez in an ill-tempered encounter.

The 29-year-old later defended Espanyol from accusations they were "violent" during the match and was quoted as saying: "If we had wanted to, the Barca players would have gone off on stretchers".

But Diop is adamant he was misquoted by the media in Spain, telling the club's official website: "At no time did I say that and I'd like it if things I actually said are what get put into articles.

"Just changing a few letters can change the meaning of a phrase.

"It's possible that I wasn't understood in terms of language, but never, at any moment, have I wanted to talk about violence or threatening anyone.

"I wish the interview could have been recorded and you could see what I said. I insist that we're not a violent team, if we had been yesterday there would have been ugly fouls or injuries or people leaving on stretchers. That's what I wanted to say."

Suarez could face A sanction after he was accused of waiting in the tunnel after the game in order to taunt Espanyol players.

Two goals from Lionel Messi and one each for Gerard Pique and Neymar saw Barca recover from Felipe Caidedo's early opener to set up a commanding first-leg lead in their round-of-16 clash.