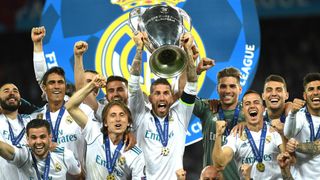 Real Madrid, Ajax, Bayern Munich. Only three teams have won the European Cup or Champions League three times in a row. Only one of them has done it twice.

Bob Paisley's Liverpool, Helenio Herrera's Inter, Arrigo Sacchi's AC Milan – great teams have tried and failed to win more than two on the bounce. Bayern were the last to do it, 42 years ago. Zinedine Zidane managed it in 28 months.

Whatever their limitations, however poor their domestic campaign has been, there can no longer be any doubt: Zidane's team will go down in history as Champions League legends. They are, as Sergio Ramos said even before kick-off, "vintage". Fortune favours the great.

There was so much doubt about their credentials this time, so much belief in Jurgen Klopp's undaunted, free-flowing Liverpool, one of the only other clubs to come close to Madrid's European record. It seemed that way from kick-off in Kiev, too: the Reds were brilliantly organised, pressing astutely, throwing Madrid off their swagger.

After those scares against Juventus and Bayern Munich, Zidane's side looked like they would at last be exposed. We should all know better.

Misfortune struck Liverpool 30 minutes in. Mohamed Salah, heir apparent to Cristiano Ronaldo and his Ballon d'Or, was forced off in tears with a shoulder injury, having tumbled to ground with Sergio Ramos, the man made for lifting trophies in this white shirt.

It left Liverpool looking uncertain, wary, and Madrid sensed it. The passing became crisper, the chances appeared, Karim Benzema denied a goal by the offside flag. Even the loss of Dani Carvajal ironically gave them a boost, with the full-back having looked every bit a player to have missed five of the last six games before he limped his disconsolate way down the tunnel.

Then Lady Luck returned. Loris Karius, whose improved form in 2018 has been a great success story of Liverpool's season, collected a simple loose ball and threw it straight against Benzema's foot. It was an error that seemed to perplex even the Madrid players, who were slow to catch up to celebrate with their team-mate, the much-maligned forward who produced arguably his best performance of 2017-18.

There was still room for another defensive lapse, a failure to clear a set-piece that gifted Sadio Mane an equaliser, a reminder of that fragility that almost let Juventus back into the quarter-final. Madrid survived that tie thanks largely to the genius of Cristiano Ronaldo; this time, it was Gareth Bale.

Just 122 seconds after coming off the bench, he scored the best goal this showpiece has ever seen. It was jaw-dropping, exquisite brilliance. That's the other side of this era-defining team: they make their own luck, too. When Karius flapped in another Bale effort to put the trophy out of Liverpool's reach, it felt like destiny was rewarding the Wales star for even attempting such a bicycle kick.

Zidane has now won nine trophies since taking over in January 2016. He has his shortcomings, as he admitted this week – "I'm not the best coach, and I will always say that. I am not the best coach tactically" – but, when the success looks like this, tactics be damned.

They survived throwing away a 3-0 lead against Juve, being dominated by Bayern, being unsettled by Liverpool. Special goals and slices of luck carried them all the way to glory again. The undisputed kings of Europe, it seems, have a divine right to rule.