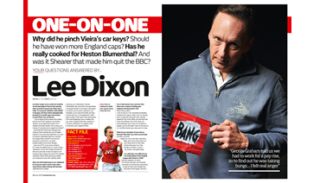 The Emirates Stadium side are set to complete an eighth consecutive season without winning a trophy since their FA Cup triumph at the Millennium Stadium in 2005.

By refusing to splash the cash on signings, Champions League qualification has steadily become less of a certainty for the Gunners.

This coupled with the sale of the club's prized assets, including Samir Nasri, Cesc Fabregas and Robin van Persie, has led to increasing calls for Wenger to step down after 17 years.

Speaking in the June 2013 issue of FourFourTwo magazine, out now, the former Gunners right-back - now a television pundit - insists Arsenal would be wrong to show Wenger the door.

"I firmly believe Arsenal shouldn't sack Arsene Wenger," he says. "I've always said Arsene lost his biggest ally the day David Dein left the club, and the link between him and the board has never been the same."

But the 49-year-old, who made 458 league appearances for the Gunners from 1988-2002, is critical of the North London club for not stumping up the cash to keep their best players and be able to challenge Manchester United and Manchester City at the top of the English game.

"At Arsenal you will always be judged by your results, and they haven't been good enough.

"Arsenal have lost too many of their best players in recent years, and Arsene must take responsibility for that. There's a way of keeping these players: to pay the going rate and to get other class players around them. The team is not good enough at the moment."

Read the full One-on-One interview with Lee Dixon in the June 2013 issue of FourFourTwo digitally and in print. The issue revisits 'The Galacticos' - Zinedine Zidane, Luis Figo, Ronaldo and Roberto Carlos - 10 years after chatting to them in our March 2003 edition, and asks them again about the majesty and madness of Madrid. The magazine also follows PSG midfielder Lucas Moura around Paris, spends Easter with the homeless, Gateshead, and glances back to Lazio's 1974 Scudetto-winning team, the Italian Crazy Gang.Find out more about the new issue