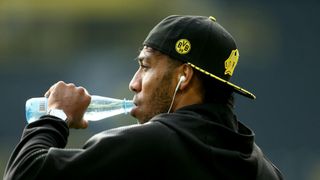 Borussia Dortmund were happy for Pierre-Emerick Aubameyang to leave the club during the most recent transfer window, the Gabon striker has confirmed

Aubameyang finished last season as the top scorer in the Bundesliga and was heavily linked with moves to AC Milan or the Chinese Super League, having also regularly spoken of a desire to join Real Madrid.

Speaking in July, Dortmund sporting director Michael Zorc alluded to an unspecified period of time during which a transfer involving the 28-year-old could be sanctioned.

But Aubameyang remained in place for the current campaign under new boss Peter Bosz and has 13 goals in all competitions for the league leaders.

"There was a time in the window when I could have changed. We [Aubameyang and the Dortmund board] agreed on this together in all openness but nothing happened," he told Sport Bild.

"I have always felt very comfortable in Dortmund, in the team and at BVB, and that is true today, too. BVB is my family!"

Dortmund are five points clear of champions Bayern Munich at the top of the Bundesliga after seven matches and host fourth-placed RB Leipzig on Saturday.