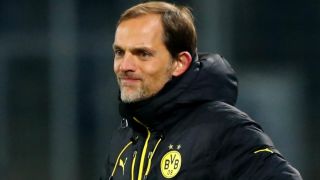 Borussia Dortmund coach Thomas Tuchel says his side are still not completely fresh as they prepare to enter the second-half of the Bundesliga season.

There has been no Bundesliga action for over a month due to the Bundesliga's traditional winter break.

Dortmund spent the majority of their break in Dubai - playing friendlies against Eintracht Frankfurt and Jeonbuk Motors - before returning to Germany to face Slavia Prague on Tuesday.

Tuchel's men ran out 3-1 winners over their Czech opponents in the friendly, but Tuchel said there is still plenty left to work on before the Bundesliga resumes.

"We had good and not-so-good spells - that's how it is when you play again on a Tuesday evening and are looking ahead to Saturday," Tuchel told the BVB website.

"We got another victory, that was our third game won. But there is still room for improvement in all areas.

"We are still not completely fresh, the competition and the atmosphere are still missing too. For the point in time we are at, we are looking good on the pitch.

"We have now had three friendly matches and we will definitely need more sharpness - but that will come in due course.

"Today you could see that in some situations we did not give it everything we had defensively to avoid risking injuries."

Dortmund's season resumes when they travel to face Borussia Monchengladbach on Saturday.