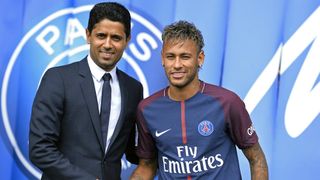 Borussia Dortmund head coach Peter Bosz expects the €1billion mark to be reached in the transfer market before too long.

The most recent transfer window saw Paris Saint-Germain smash the world record by paying €222million to bring Neymar to Ligue 1 from Barcelona.

The Catalans replaced the Brazil star with Dortmund's Ousmane Dembele, who became the second most expensive player in history after completing a move for an initial €105million.

Spending has escalated since Cristiano Ronaldo's move to Real Madrid for a then-record €94m in 2009, with eight of the nine most expensive transfers in history taking place in the last four years.

PSG's huge investment also included a deal for Kylian Mbappe that will see them pay a reported €180m to make his loan move a permanent one next year, prompting UEFA to open an investigation in relation to possible Financial Fair Play breaches.

However, rather than expect teams to be put off by the potential repercussions of matching such exorbitant fees, Bosz believes a 10-figure sum for a single player is not out of the question.

"I think we will experience a football player being transferred in a total package worth €1billion," he told Bild.

Another Dortmund player to be linked with a big-money move is Pierre-Emerick Aubameyang, who was the subject of interest from clubs in the Chinese Super League during the transfer window and is also a reported target for Liverpool.

The Gabon star decided to stay at Signal Iduna Park and has started the season in stunning fashion, scoring 13 times in 11 appearances in all competitions.

Bosz admits there are few more vital players to Dortmund than the 28-year-old.

"He's not only important to the team because he scores goals, but because he always gives 100 per cent, whether it's in games or in training," he said.

"He's almost more than a footballer. He's a great man and a real leader."