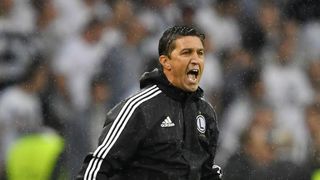 Legia Warsaw coach Besnik Hasi was unable to hide his frustration following Wednesday's 6-0 Champions League thumping at the hands of Borussia Dortmund and labelled the match "a catastrophe".

The Polish giants conceded three goals within the opening 17 minutes as Mario Gotze, Sokratis Papastathopoulos and Marc Bartra all scored early on.

And Legia failed to bounce back in the remainder of the game, with Raphael Guerreiro, Gonzalo Castro and Pierre-Emerick Aubameyang pouring even more salt into their wounds after the break.

"After 17 minutes the game was finished. It is very frustrating. It was a catastrophe," Hasi told reporters.

"We tried to avoid conceding more goals in the second half but did not manage to do it. We defended in a very bad way.

"Of course, Michal Pazdan could not play because of injury and this was a big loss for our defence. I did not have so many possibilities to build this formation.

"Definitely we conceded the goals too easily. Two goals from set pieces is also too much as Dortmund don't have tall players."