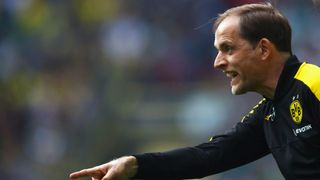 Borussia Dortmund head coach Thomas Tuchel says a win in the DFB-Pokal final would "crown" his side's season after they clinched third place in the Bundesliga with a 4-3 victory over Werder Bremen.

On a dramatic afternoon of twists and turns at Signal Iduna Park, two goals each from Marco Reus and Pierre-Emerick Aubameyang helped Dortmund twice come from behind to beat an impressive Bremen side, who scored through Zlatko Junuzovic, Fin Bartels and Max Kruse.

The result made certain of Dortmund's automatic qualification for the Champions League group stage next season, and Tuchel hailed the resilience his players showed to end their league campaign on a high ahead of the cup final against Eintracht Frankfurt in Berlin.

"The performance of my team makes me proud," he said. "We gave everything and I can't compliment them enough.

"There were two completely different halves and we showed a good response to the early setback.

"The start of the second half was totally messed up, but we played with a lot of passion right to the end.

"We are very, very happy"

The rescheduling of Dortmund's Champions League clash with Monaco following an attack on the team's bus was at the centre of a disagreement, but Tuchel insisted he has enjoyed the campaign from start to finish.

"The season had different phases," he said. "We fought to the very end.

"We had many injury problems and there were lots of issues, but it was always fun - even in the difficult times.

"The guys have always, always provided. Now we want to crown the season next week."