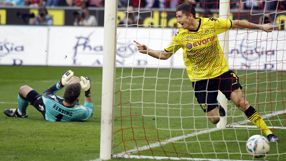 Cologne were crushed 5-0 by Dortmund earlier in the season but there was little sign that a repeat was on the cards when Milivoje Novakovic headed the hosts ahead after 13 minutes.

However, Lukasz Piszczek equalised with another header in the 26th minute, then a spectacular volley from Shinji Kagawa and Robert Lewandowski put Dortmund in control after the break.

Champions Dortmund, unbeaten in their last 21 league games, have 62 points from 27 games and Bayern Munich, who beat Hannover 96 2-1 on Saturday, have 57.

Cologne dropped to 14th with 28 points, only one ahead of Hamburg SV in the relegation play-off spot and two clear of Hertha Berlin in the drop zone.

A late goal by Cacau gave VfB Stuttgart a 1-0 win over Nuremburg in Sunday's other game between two mid-table sides.

Cologne's shell-shocked players were as baffled by anyone at their second-half collapse.

"We had a chance at half-time but once they made it 3-1, they gave them more room and the played good football," said Sascha Riether. "We have to apologise for our second-half performance."

The hosts made a bright start and went ahead when Novakovic beat two defenders to Martin Lanig's cross to score with a looping header.

Cologne, however, gifted Dortmund an equaliser when Piszczek was allowed to rise unmarked at the near post to head in Marcel Schmelzer's free-kick from near the corner flag.

Kagawa fired Dortmund ahead with a spectacular volley at the far post two minutes after the restart and the Japanese was also involved in the third goal five minutes later.

Kagawa's clever backheel allowed Jakub Blaszczykowski to burst into the area and he laid the ball off for his fellow Pole Lewandowski to convert his 17th goal of the season.

The last quarter-of-an-hour were embarrassing for Stale Solbakken's side who capitulated meekly.

Following a mistake in the Cologne midfield, Kagawa was again the provider in the 79th minute as he left Gundogan was left with the simple job of tapping the ball into the net.

In the next attack, Piszczek crossed from the right and Kagawa beat team mate Lewandowski to the ball - the only other player near him - to sidefoot home from close range for his 11th goal of the season.

Perisic completed the rout after Dortmund again sliced through the Cologne defence as if it was not there.