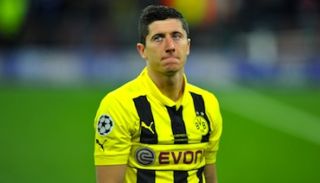 Bayern, who completed a treble-winning season earlier this month, were fully expected to poach Lewandowski from the Champions League runners-up after they already persuaded talented Dortmund midfielder Mario Götze to join them for next season.

"Robert Lewandowski will definitely not transfer to Bayern Munich in 2013," Watzke told Bild newspaper. "This is final. We have informed Robert and his advisors. The Bayern case is closed because there was no written offer."

Dortmund, who won consecutive league titles from 2011 with Lewandowski but lost 2-1 to Bayern in the Champions League final in May, appeared to have little choice but to sell the player after he refused to extend a contract that ends next year.

Last week, the Poland international said he expected to transfer to his "club of choice" in a few days but Watzke said Bayern never made a formal offer.

"It is absolutely legitimate for a player to express such a wish," Watzke added.

"There were two phone calls in the past four weeks with Bayern. We told Bayern that due to stock exchange rules [as Dortmund are a listed company], we need a written offer for Lewandowski. But until today, no offer has come in.

"If Robert wants to go to Munich he will have another chance next year."

Watzke, however, did not rule out the prospect of Lewandowski leaving Dortmund for another club.

"I am not saying he will definitely stay but he will certainly not be playing for Bayern in 2013," Watzke said.

"Everything else will be discussed with Robert and his advisors in the coming days. Our wish is for Robert to play for Borussia Dortmund next season."