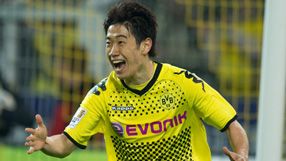 The 23-year-old Japan international has attracted the interest of several top clubs during another memorable season in which he has scored 12 goals and set up another seven to help Dortmund to the top of the Bundesliga.

Snapped up for just 350,000 euros from Japan's second division in 2010, Kagawa is now valued at around 15 million euros and Dortmund are eager to extend his contract which runs out next season.

Premier league Chelsea and Manchester United are reportedly among the clubs interested in the skilled player.

"We have had talks with Shinji (Kagawa). From our side we have made him an offer and now Shinji has time to think about it and decide," Watzke told Reuters in an interview.

"Then we could have a talk after 14 days or so. That is if it is necessary. We have not given Shinji any ultimatum."

"He could say yes now but if he wants to talk about it then we can talk. Then a decision can be taken in the coming weeks. But I am confident that Shinji will stay with us," said Watzke.

Watzke is credited with steering Dortmund away from financial collapse some seven years ago and guiding the club and 1997 Champions League winners into the most exciting sports brand in Germany in the past two seasons.