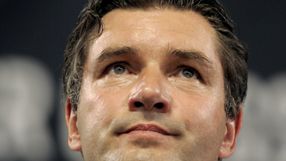 Dortmund's Robert Lewandowski scored the only goal in their 1-0 victory against second-placed Bayern as the champions moved six points clear at the top of the table with four games left.

"It is still a long way until the title," Dortmund's Zorc said after his team's 11th victory in 13 league games since the winter break. "It was an important step but not more than that."

"We are obviously happy with the victory but our next opponent, Schalke, is extremely tough and we also play Gladbach," said Dortmund coach Jurgen Klopp.

"I cannot pretend we have already beaten them both. We still need to remain focused because otherwise we will not be able to perform in such a way as we did against Bayern."

Klopp could field an even stronger team with gifted playmaker Mario Gotze, who watched from the stands on Wednesday, set to return from a groin injury that had left him out of action since late January.

Schalke are eager to put their 4-1 demolition by Nuremberg on Wednesday quickly behind them as they struggle to hold on to third place that leads to automatic Champions League qualification.

Schalke are on 57 points, four ahead of Gladbach in fourth.

"We cannot change the result at Nuremberg but we have to do everything possible so that the boys can be fresh again for the derby. We need to get a good result," said Schalke coach Huub Stevens.

Bayern, who saw their treble chances all but dashed, host lowly Mainz 05, with their eyes now set firmly on their Champions League semi-final clash against nine-time winners Real Madrid, and the German Cup where they face Dortmund in May.

"We will congratulate the champions once it is mathematically clear they will win it but I fear we can no longer stop Dortmund from winning the title," said Bayern CEO Karl-Heinz Rummenigge.