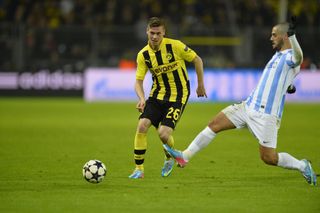 The Poland international is currently undergoing hip and groin treatment and has not featured for the club this season.

While the 28-year-old is eager to return to the side, he insists he will not rush his comeback and risk a further lay-off.

"My goal is to come back for the second half of the season," Piszczek told Bild, before stating his intention to complete his return in good time.

"Even though I have now and then a little pain, it is definitely much better than before the operation. I am satisfied.

"I will do nothing unnecessary to put myself under pressure after such a major operation."

There were fears that manager Jurgen Klopp may be without fellow defender Marcel Schmelzer too, after he was forced off with a facial injury in Germany's 3-0 win over Austria.

However, Schmelzer calmed nerves after the game, insisting he will miss no game time.

Dortmund have made an impressive start to their season, winning the DFL Supercup and leading the Bundesliga with a 100 per cent record.