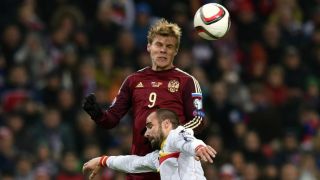 The Russian champions, who announced the deals late on Saturday, expect both players to join up with the training camp in Portugal in the coming days. The transfer fees have not been disclosed.

Former Chelsea left-winger Zhirkov had previously agreed on a switch to Zenit at the end of the season, but Dinamo accepted a fee in order to bring the transfer forward.

Kokorin's strong form for the capital club since moving from Anzhi Makhachkala had seen him linked with Arsenal prior to Zenit's interest, with Dinamo ultimately forced to sell as a result of increasing financial difficulties in recent months.

Andre Villas-Boas' side entered the mid-season break in sixth in the Premier League table and will face Benfica in the Champions League last 16.