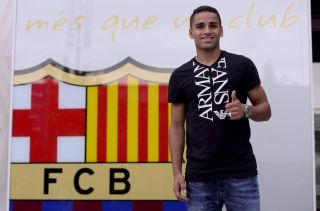 The Catalan giants announced that a deal had been agreed with Sao Paulo for the 24-year-old's services on Wednesday.

Douglas has now completed his medical and penned terms at Camp Nou until 2019.

Barca have paid an initial €4 million to the Brazilian side, with an extra €1.5 million due dependant on appearances.

"After a busy day which included his medical...the Brazilian came to the club offices this evening to [put] pen to paper on the five year deal worth 4 million Euros, with a further 1.5 million depending on the number of games he plays," read a statement on Barca's official website.

The Brazil Under-20 international joined Sao Paulo in 2012 and was part of the side that clinched the Copa Sudamericana two years ago.

He will provide direct competition at full-back for compatriot Dani Alves.

Douglas is the latest defensive reinforcement for Barca, who had already brought in Thomas Vermaelen and Jeremy Mathieu during the current transfer window.