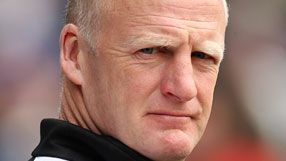 "We are delighted to confirm that Iain Dowie is the club's new manager, initially on a short-term contract," Hull said on their website.

Dowie, who has managed in the Premier League with Crystal Palace and Charlton Athletic, has nine games to try and reverse Hull's dive towards a return to the Championship which cost Phil Brown his job on Monday.

Hull, who have not won away in the league all season, are in 19th place with 24 points, three away from the safety zone and have a game against bottom club Portsmouth on Saturday.

Relegation could have dire financial implications for Hull with auditors Deloitte stating that relegation to the Championship could leave them with a 21 million pounds funding shortfall. However, Dowie believes he can save them.

"I'm not one to be frightened by a challenge," Dowie said. "It's a about getting everybody together and pulling in the same direction."

Dowie, a former Northern Ireland striker who played for Southampton and West Ham United, cut his managerial teeth at Oldham before taking over at Crystal Palace in 2003 and leading them into the Premier League via the playoffs.

Palace lasted only one season in the top flight although Dowie enhanced his reputation as an astute coach. He joined Charlton in 2006 but lasted just 15 games there and left after a poor start to the Premier League season.

Since then Dowie has had spells at Coventry City and Queens Park Rangers in the Championship as well as a brief spell as assistant to temporary Newcastle United manager Alan Shearer at the end of last season.

Dowie will be assisted by former England goalkeeper Tim Flowers and Steve Wigley at Hull.