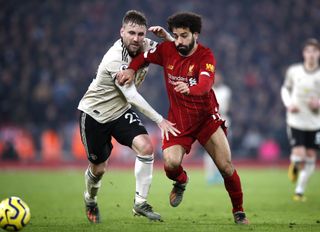 Liverpool and Manchester United are heavily involved in the plans alongside EFL chairman Rick Parry and, if adopted, they would represent the most significant changes to English football in a generation.

While the proposals promise an immediate £250million rescue package for EFL clubs starved of income by the coronavirus pandemic and a fairer share of revenue in the future, they have been criticised for concentrating too much power among the league’s big six clubs.

Now, the Prime Minister’s official spokesman has said: “It’s clear that this proposal does not command support throughout the Premier League.

“It is exactly this type of backroom dealing that undermines trust in football governance.

“In terms of support for EFL clubs, we have been given assurances by both the Premier League and the EFL that they have no intention to let any club go bust due to Covid and we know that they have the means to prevent this from happening within their existing mechanisms.

“We would strongly urge the Premier League and the EFL to continue to work constructively to come up with a deal that provides a comprehensive package of scores for the whole football family.”

Parry has rejected the suggestion that proposals to give greater voting rights to the nine longest-established clubs in the Premier League, which includes the division’s big six, amount to a power grab.

Asked on BBC Radio Four’s Today programme whether the bigger clubs were simply in it for more money, he said: “No, they’re not, they’re giving a lot of money to us. Why would they be giving 25 per cent of the TV revenues to (the EFL) if all they were trying to do was grab power?

“Let’s not get hung up on process and ‘he said, she said’, this is a really good plan for the pyramid and let’s make it happen.”

Parry’s stance was backed by Leyton Orient chairman Nigel Travis, who warned that clubs could go out of existence “within five to six weeks” without financial help.

“If clubs don’t get something soon you will see clubs disappear, I would predict, within five to six weeks,” Travis told BBC Radio 5 Live.

“This is a great proposal as far as we are concerned. It is certainly very promising and clubs need it. Something like this has to go through.”

Sources close to the Big Picture plans accept there are many indirect benefits to the big six within the plans – notably affording them the ability to sell eight matches a season to fans outside the UK direct from their platforms, from which they would stand to make more money than smaller clubs, plus the freedom created by an 18-team top division to play more lucrative European and friendly matches.

Ultimately it is accepted that these proposed changes, which those involved insist are a work in progress, must be signed off by the Premier League clubs.

The Football Association retains a ‘golden share’ in the top flight which it can invoke where it feels something detrimental to the good of the game is occurring.

The Premier League said on Sunday the proposals would have a “damaging impact” on the English game.

It is understood to be concerned by the revenue distribution models within the plans, which it claims means the team finishing top would earn four times more in central payments than the team at the bottom. Currently, the top team earns 1.8 times more than the bottom team.

Forest Green chairman Dale Vince said the plans to dramatically increase the share of Premier League broadcast revenue cascading down to the EFL were “exciting” but accepted the proposed changes to Premier League voting rights were likely to be “contentious”.

He proposed a middle ground where a simple majority vote replaced the current system whereby 14 clubs must support a motion for it to be carried.

“This has got some questionable elements – it’s not perfect but they might just be negotiating points,” he told the PA news agency.

“The bit I’m thinking of is the proposal for six big clubs in the Premier League to dominate the voting. If that was done as a simple majority that would be an improvement on where we are today where it takes 14 out of 20 to pass any rule change.

“I think that is the part that people are railing against as far as I can see. It stands out as a bit of a power grab – we’ll give with one hand but take something a little bit bigger with the other hand.

“It’s the most contentious part of the whole package.”

Ron Martin, chairman of League Two side Southend, gave his tentative backing to the idea based on the information currently in the public domain, telling PA “from what we do know it does appear to represent a fairer and sustainable way forward for the football family.”

Rochdale chief executive David Bottomley told PA the League One outfit were “very grateful there is now a plan on the table” for financial help and praised Parry and the EFL for “driving this forward”.

But he added: “I just feel it’s probably going to come at a cost that maybe at this time could have been avoided. I’d agree that perhaps the game does need a complete restructure, but I don’t think now is the time to do that.

“You’re grateful there is something emerging, but tinged with some disappointment that it would appear that there will be a lot of conditions attached, and it has to be voted in – and I’m not quite sure everybody will vote for this.”

Championship side Stoke are in support of developing any discussions that concerned the financial gap between the Premier League and the second tier.

Potters joint-chairman John Coates said: “We have long believed that the major long-term issue facing English football is the cliff edge between the Premier League and Championship finances and we are in support of developing any discussions where this is firmly on the agenda.”