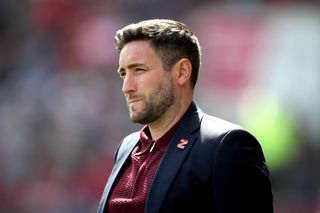 Bristol City drew 1-1 at Hull on a dramatic final day of the season as the Robins failed to make the Sky Bet Championship play-offs.

Lee Johnson’s side had gone into the game needing to win but as both Derby and Middlesbrough won their games what happened at the KCOM Stadium became irrelevant to the play-off picture.

Jackson Irvine scored early in the second half with a low shot but substitute Matty Taylor equalised late on to ensure the points were shared.

Famara Diedhiou missed two first-half chances to put the Robins ahead, the second a close-range header which came back off the bar. Substitute Nicolas Eliasson also saw his second-half goal ruled out for handball.

Hull head coach Nigel Adkins kept his promise to field a strong side as Jarrod Bowen, Kamil Grosicki, Markus Henriksen and Fraizer Campbell all started despite being linked with moves away from the club this summer.

When Campbell was substituted early in the second half he made a point of shaking the hand of everyone on the Hull bench after being given a loud ovation by the Tigers fans.

Adkins also faces an uncertain future with his contract expiring in the summer – but at least he gave the Hull fans a positive end to the season if this was his last game in charge.

The visitors started brightly as Josh Brownhill fed Jamie Paterson but when he centred low across the six-yard box Reece Burke cleared the danger at the expense of a corner.

Kevin Stewart started and finished a move involving Campbell and Grosicki down the left but when the midfielder slipped a tackle to shoot from the edge of the area his effort was blocked.

Stewart field just wide from 30 yards after Eric Lichaj had cleverly laid the ball back to him with 18 minutes on the clock.

Burke was in the right place again to block a low ball before Diedhiou volleyed off target from Paterson’s lobbed cross nearly half an hour in.

Bowen fired a free-kick from distance narrowly over and Campbell was wide with a header at the far post as both sides struggled to find the target.

The visitors should have led five minutes before the break as Paterson crossed deep from the left and Brownhill headed back across goal but Diedhiou’s close-range header hit the bar.

Bowen then forced goalkeeper Max O’Leary into his first save with a low shot from outside the area and Grosicki was unable to get his outstretched foot to Campbell’s ball across the six-yard box as both teams finished the half strongly.

Grosicki tried to return the favour in the fourth minute of the second half but his ball from the left evaded both Bowen and Campbell as they slid in.

Hull took the lead after 54 minutes as Irvine collected a poor clearance from Lloyd Kelly and fired left-footed across goal into the bottom right corner.

Bristol City thought they were level eight minutes later when substitute Eliasson forced the ball home after Hull had cleared a series of shots.

However, referee John Brooks – who had initially allowed the goal to stand – spoke to his linesman before disallowing the effort for handball in the build-up.

O’Leary again denied Bowen as he saved the winger’s shot with his feet with two minutes remaining.

The same linesman flagged Taylor offside when he headed home following a goalmouth scramble but this time referee Brooks gave the equalising goal.

Irvine saw another effort blocked and Nouha Dicko’s shot hit the bar as the game ended in a 1-1 draw – which was not enough for the visitors as they finished two places and four points outside the play-off places.