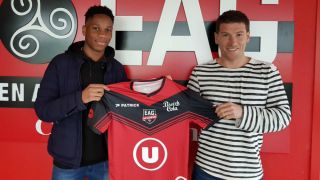 Chelsea great Didier Drogba has welcomed the news that son Isaac has signed for Guingamp.

The 17-year-old, who has been playing in Chelsea's academy, was announced as the Ligue 1 club's new signing on Monday.

Drogba is delighted to see his son follow in his footsteps, with the former Ivory Coast striker having spent the 2002-03 season at the club.

"Couldn't be more proud of you," he wrote on Instragram, alongside a picture of Isaac at his presentation.