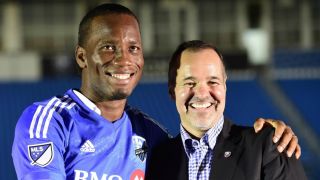 Montreal Impact striker Didier Drogba asked for patience on Thursday, as he begins the work required to be ready for his MLS debut.

Drogba has not played since Chelsea's final match of the 2014-15 Premier League season and the 37-year-old knows it will take him time to get back to peak fitness, with the rest of Montreal's squad having completed half of this year's MLS campaign.

The Impact signed Drogba on Monday as part of a trade with Chicago Fire.

"It's almost been two-and-a-half months that I haven't played," Drogba said, according to the MLS's website.

"I'll need time. We'll see with the coach... I will eventually play but I want to be able to contribute to the team and not be kind of a burden. I need to get ready."

The former Ivory Coast captain - who has played for Marseille, Chelsea and Galatasaray during his career - also underlined the importance of Montreal's multi-cultural nature in convincing him to join the Impact.

"I quite simply felt like getting to know the city. I was won over by the project and by the work that the president has already started with the club, looking to give back to the community through soccer. It's a little bit like what I do with my foundation.

"My children are bilingual. I know there are superb schools here. It also went into my decision."

Impact president Joey Saputo claimed that Montreal's run to the final of the 2014-15 CONCACAF Champions League had helped the club secure Drogba's signature.

"Our past success in international competition has given the Montreal Impact some relevance outside of our country, opening doors to players like Didier to choose to play here," he said.

Montreal's next match is away to New York City on Saturday.