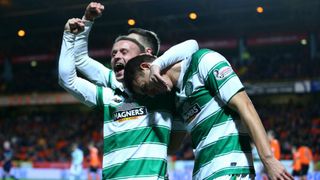 Leigh Griffiths broke through the 50-goal barrier for Celtic with a brace as the Scottish Premiership champions cruised to a 4-1 win at rock bottom Dundee United.

Former Wolves striker Griffiths capitalised on a slip from Gavin Gunning and thumped a 21st-minute goal through home goalkeeper Eiji Kawashima to bring up the landmark – removing his jersey to reveal a shirt bearing the number 50.

That act of exuberance earned the goalscorer a yellow card, but he and his team-mates were celebrating again six minutes later as Jozo Simunovic dispatched a close-range header from Kris Commons' left-wing free-kick.

United briefly rallied and pulled a goal back before half-time, Simon Murray converting John Souttar's throughball, but it was 3-1 early in the second period as Griffiths swivelled at the far post to steer home and Commons volleyed a wonderful fourth in the 56th minute.

Celtic are six points clear of Aberdeen at the top, their nearest rivals travelling to Ross County on Sunday, having played the same amount of games.

Dundee United are 11 points adrift of Kilmarnock in last place, and have collected just two points since their last league win over County on October 31.