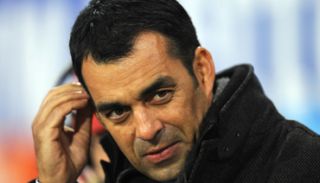 The 48-year-old will replace Thomas Schaaf who was the country's longest-coaching top flight coach when he was sacked by the four-times German champions earlier this month after 14 years.

"I'm very happy to take my place on the bench again," former Germany defender Dutt told the club's official website. "Werder Bremen is a great club and it's a very interesting task."

Dutt made a name for himself after guiding Freiburg into the Bundesliga in 2009 and keeping them there until his departure in 2011 for a season at Bayer Leverkusen.

"With Robin Dutt we have signed our preferred candidate for the trainer's job and are convinced that we can make a successful new start," said sports director Thomas Eichin.

Schaaf led Werder to the 2004 German league and Cup double and two more German Cup wins and two runners-up places in the Bundesliga.

But the club struggled this season, finishing 14th in the 18-team table and only three points clear of the relegation playoff spot after failing to win any of their last 13 match.

Schaaf's ties with Werder stretched back to 1972 when he joined as an 11-year-old before embarking on a 17-year playing career at the northern club.

He was promoted to head coach in May 1999 after coaching the club's youth teams for a decade.